And we have commence the second half of the month of March! Yikes! Where did the year go?? Wasnt it January the 1st of 2016 just a couple of days ago?? Annd today I’m going to venture on to a new kinda post! Hope you like it and please share your thoughts ^_^

In the last couple of weeks, I’ve been busy with studies and a smack of reading more than my attempt at book reviews show. The day before, my bestie who I’m going to call Zephyr (not real name, but its her twitter handle, that counts yea??) was talking about a new anime she was hooked to, so I decided to take up on that after falling in love with the art and the music.

I think its great to watch the English subbed versions of anime or any foreign shows rather than the ones that are dubbed because that way you are exposed to different languages. It was a refreshing learning experience after some time (I havent watched anything in a few months). The last one I watched was Inazuma 11 with my brother, an anime on Japanese/ world football. My constant thought on that was, will the alien teams never stop coming!!!??

So yesterday I spent various moments of the day hooked on the series called Norn9 and we girls binge discussed it overnight!! So many memorable scenes, so many feels!!

It is the year 2016, and a boy called Suzuhara Sorata finds himself being warped in time back to the year 1919. There he finds himself on a flying globe, a ship called Norn carrying nine young men and two young women. They are those with special abilities who contain the power to reset time, to go back in history. It is the age of great power. Liberalism and revolution has spread around the globe. The earth is dying from all the pollution. Those in power want to do the Reset once again. This time round they are vying for the 5th history. Will those with powers aid in making it happen or will they join forces to stop those who want it to happen?

First appearances apparently arent correct in this series except for the pale coloured romantic art that yes, suggests rightly there’s romance. Ha! Those who I thought were textbook bad guys turned out to be the ones doing the good, while the people right in your face turned out to be crazy ass puppet monkeys. Ahh! It was frustrating at first but I enjoyed the frustration and I felt the episodes get better as it goes on. I dont think its a time gone to waste, the art was really good, the music even better!

In Norn9, you will meet power hungry psychopathic ring masters, humanoids, aliens and mechanical chicks who act as house keepers and aidees (SO KAWAIII!! ). In the sparse 9 episodes I’ve watched so far, it has been a enjoyable time with laughs, grins, emotional drama, high actions sequences and the odd annoying bits here and there.

Romance is not far from most of their minds, well technically its impossible to not think about it they are stuck on a ship 24/7. Since this was initially a game that they turned into an anime series, its a perfect reverse harem where with ‘ships’ of all kinds floating about. Reverse Harem is when the female protagonists usually have more than one possible love interests on them.

The three heroines each are vividly different in character.

Koharu is rather ignorant (lol) and audibly having an annoying voice that I promise you get used to as she gives a socail commentary on ‘everything’ but she has some great quotes! Mikoto is outwardly rough and powerful but in reality is really caring and concerned. she is intelligent and decisively the best heroine of the three . Nanami is two sides of the coin both strong and sensitive but I couldnt stand her, thought there were tons of Akito-Nanami scenes that tickled us pink with laughter! The humour is of no end thats for sure, while the more intimate moments are down right mechanical!!! Come on Koharu dont be SO naiive!! lol.

Akito who is as scared of ghosts as he is of the chicks. Chicks in ghost costumes must be horrific!! XD

My ships!!
Aaaark!! I am in love with Akito! He was initially a bit of a rude moody crab, but as the series goes along he reveals more of himself that I just cannot resist. Clearly Nanami knows this too. They are sweet together. And then there was the wolf version of Akito thats just…. so fricking cute!! lol

Initially I shipped Kakeru and Koharu the main power couple, but it was soon apparent the couple to ship was Mikoto and Natsuhiko. If you intend on watching it, you’ll see what I mean ^_^ There’s a few bromances that we get a glimpse of, and the girls are sweet with each other rather than biting each others heads off in a cat fight, which is a relief. 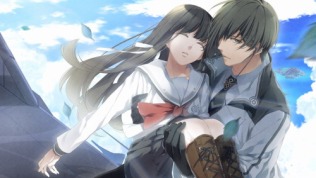 My top 3 would be Natsuhiko, Akito and Kakeru while Sakuya, Senri and Heishi are the sweethearts that I cannot not like. There’s something about Senri that makes me want to protect him!! My herione of choice is Mikoto for her spunk and good nature when needed.

Clearly, I loved it, and I’m so disappointed I have to wait for the remaining three episodes of the season. I was shocked when I found out…. For those interested its released at 21:30 JST on Thursdays. You can watch Norn9 here

I’ll leave you with a quote that rings true for me at the moment. Just troubles..

Please do check on it and tell me how you liked it. !!