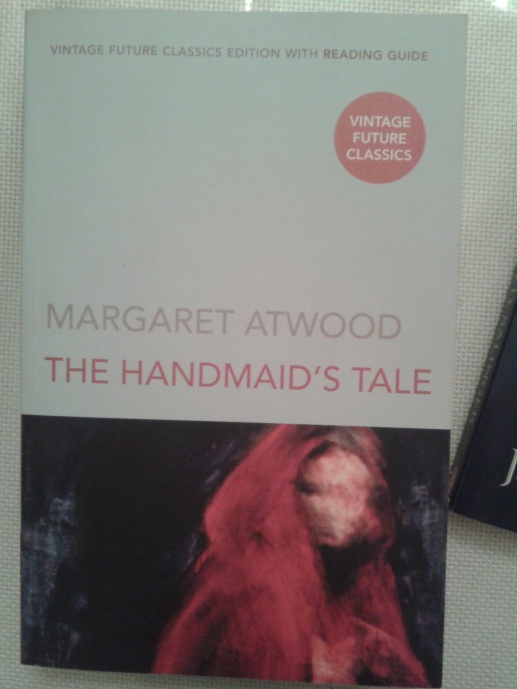 Based in the Republic of Gilead, this is the story of Offred (Of Fred) and other female handmaids stripped of their previous identities, used for the purpose of breeding for those elite families who cannot conceive. We witness a monthly ritual of impregnation, daily walks to the shops, a routinely life style, serious boredom and deafening silence. Offred has visions of the past, the time when everyone had families, the time when she had rights, a body of her own, a real job, a real name; an identity.

There is a strict religious totalitarianist law. Women are oppressed to the point where they are not supposed to read, no books no magazines even no store names. Each one is categorized into a group, some for the chores, some for being the Masters, and others for breeding. The environmental situation has made many women sterile, hence the ones who aren’t (YAY?!) are made to be baby making factories against their will. The situation is very pathetic regardless of the proposed system of order, no one is truly satisfied, no one is feeling fulfilled, at least not this first generation of brain washed individuals, and as Aunt Lydia says, it would get easier as the generations go on.

~My thoughts…~
It’s a compelling book with a yes, cold and impersonal tone but given the subject matter at hand, it is suitable. Though it is often put into the category science fiction, it is far from it. There is nothing new about the practices we see, it is only a reversal of time almost. Written in 1985, this book touches on many issues be it gay rights, abortion or women’s rights that were being held in question at the time.

The story in retrospect is a warning that if we allow religious extremism to take over our lives, it will be unbearable. There will only be oppression and cruelty, going against the fundamental laws of nature. The book is almost a parody on the conservative positions held during the time it was written. From the notions of women, women’s rights, gay rights to abortion. The location of the story is ironic. It is based in Massachusetts, the state housing Harvard University, a renowned center of knowledge yet we find the law subjecting women to ignorance. We see religion being imposed on in a state that in recent years is one that apparently has been deemed one of the least religious in America.

Her dystopia is one where we see a reversal on all the rights women currently hold. It will be a disaster, a nightmare to womankind. I should say that the book is thought provoking and the feeling of oppression seeps through to you. It reminded me of  the current trilogies like the Hunger Games books where there too we find a form of totalitarianism.

What I don’t get is how quickly the change takes place. Is it possible from being a society where women have the freedom to rally about pornographic magazines to become one where women walk around in red veils barely talking to other women? The epilogue is something else, it doesn’t answer much, and I would have preferred something a bit more on Offred, or perhaps on the community as a whole.

The question is, 30 years on, is the novel still too extremist and radical to be imagined?

*There is just so much this book weighs in for, the discussion could go on and on…*